Rathgall is a multivallate hillfort, on the edge of a ridge with four concentric stone walls and extensive panoramic views. It is an imposing monument covering a total area of 7.5ha (18 acres), with the inner circle measuring 15 metres wide.

Excavations, started in 1969 (Raftery), revealed important evidence for Late Bronze Age activity at Rathgall, dating to 800BC. Evidence of a house was discovered in the inner stone circle with the second and third ramparts forming the main defensive walls.

Extensive metal workshop areas were uncovered in the inner and outer circles for casting large quantities of bronze weapons and tools. Other finds included glass, bronze and stone objects, clay moulds, gold and glass beads and other artefacts. It is clear from the excavations that an important wealthy family or small community lived on the hilltop.

A small ring with mercury gilding was discovered. Mercury gilding was used to stick gold to bronze. It is an object of great beauty and testimony to the wealth and stature of the Rathgall community of artisans. The quantity of metalworking evidence found for casting swords, spearheads, axeheads etc, suggests that they were producing more than their own requirements and the surplus was exchanged for raw materials and other products. 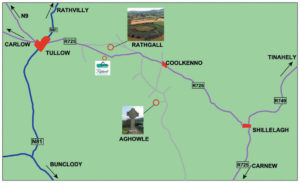 1969-1971 Prof. Barry Raftery started excavations at Rathgall. He picked Rathgall site as it is beside the road and had easy access. In order to get funding from the Board of Works or employ an archaeological student, he had to employ four local people. With their help, he uncovered almost 50,000 chards of pottery during the excavations!

It took over 3 years to dig out the entire 15 metre wide section of the inner circle. Within an hour of starting work, he had located pottery pieces. Over 10,000 finds were from the inner circle; glass objects, clay moulds, stone and gold objects.

Post holes indicate that there was a small house like structure within the circle. The ditches were filled in with black material among the stones. An oval pit was discovered near the centre of the house. It had a carefully placed large boulder on top of black material almost covering the pit. The pit had been back filled in with yellow clay around the boulder. When the black clay was taken out, they found a small gold – plated copper ring, 1 cm wide approx, embedded in burnt baby’s bones. They came to the conclusion that this was a burial or ritual pit.

1972 & 1973  They moved to the southern slope of outside of the inner circle and were getting 400 finds per day. Prof Raftery got down to prehistoric levels after 1 foot in some places. This area was jampacked with artefacts, glass, gold, animal bones, pottery and basket remains. Rabbits had done a lot of damage and stones were removed by people over the years. They found 100’s of clay mould fragments embedded in black clay like substance. Clay moulds are always broken when found as they could only be used once. The moulds were made for swords or whatever was needed, copper was poured in and in order to get out the sword etc, the mould had to be broken. He found a smaller crucible with traces of lead in it, parts of blades of swords or rapiers, spearheads, cauldron legs but not the cauldron.

The great second rampart, doubtless the principal prehistoric defensive construction, rests on a layer of plough soil from which came several clay mould fragments of the later Bronze Age. It also yielded charcoal which was carbon dated to the late Bronze Age. Evidence of grain growing and animal husbandry was found indicating that they were an important part of their economy. 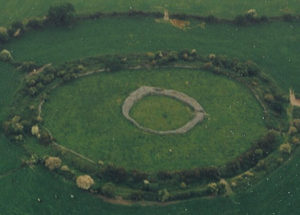 1974 – In Bronze age times people were buried crouched down in a foetal position and put in a clay pot. The remains of a female and child were discovered in such a clay pot at Rathgall, buried in a pit underneath large slab stones.

Eighty eight glass beads were uncovered, which is the largest quantity found in any other Bronze Age site in Ireland. These beads are 1 – 3 cm wide, mostly circular in shape, blue-green in colour and with a hole in them. This collection is unprecedented in the late Bronze Age of Ireland and is also one of the largest from a single site as yet discovered in Western Europe (Raftery and Henderson 1987). Prof. Raftery found a 2cm twisted gold cylinder with its ends finely hammered and a dark green glass bead mounted in the middle, 2 -3cm wide. Tiny delicate loops of gold were attached to each end. This is an object of great beauty and advanced technological expertise. He also found a metal disc with mercury gilding on it. Mercury gilding was used to stick gold to bronze. He got this piece analysed by a British museum and the piece was dated back to 1000 BC. Before it was analysed, the Irish professionals did not believe that this came from Ireland as nowhere in the world had mercury gilding been found that dated back further than 400 BC. Only the fact that it was analysed by an English museum did they believe it! Prof. Raftery felt that this emphasised the exceptional importance of the Rathgall site.

Rathgall was occupied for a short period during the Iron Age, represented by an iron-smelting furnace dated by radio-carbon to the second or third centuries AD. It was occupied last in the 12th and 13th centuries as is evident from the green-glazed pottery of medieval character and two silver coins discovered. The first coin was minted in Dublin between 1221 and 1283 and the second minted in London sometime after 1350. 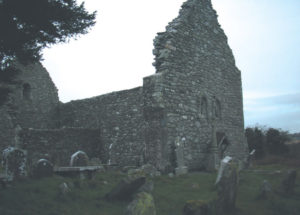 St. Finnian established a religious community at Aghowle (field of the apple trees) early in the 6th Century. He erected a â€˜Teampall MÃ³râ€™ or big Church as he had a large number of monks living in Aghowle. They lived in beehive cells, built around a wooden Church. St Finnian continued to live in Aghowle for 16 years. Around 1100AD the wooden Church was replaced with the present stone structure.

Aghowle Church is the most important of the early ecclesiastical remains in the district around Tullow. The Church measures sixty feet by twenty-four feet, which was the regular measurement of the primitive Irish Cathedral or Abbey of the time. The two gables are thirty-five feet high and the walls are nearly three feet thick and built of cut granite stone.

The west gable door is a rare example of Gaelic-Romanesque architecture with only one other example in Ireland. It contains remarkable moulding techniques and fine chiselling. The South wall was unfortunately demolished before 1839 to build a cross wall at the west end, enclosing a burial ground for two local families. The Church yard today contains the graves of many from different religious backgrounds that used the Church after the Reformation. 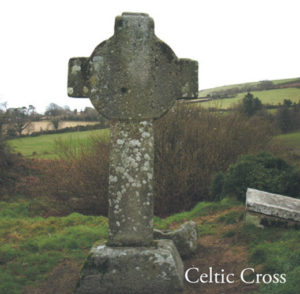 On the South-West side of the Church is a very fine Celtic Cross made of granite stone and standing at 12 feet 4 inches in height. This Cross dates from the primitive ages of the Irish Church as it exhibits no sculpture or inscriptions. Local legend says that if you can encircle the Cross with your arms and your hands link, you will come into good fortune! The Church yard also contains a water font that is believed to cure skin ailments.

Although no trace of a belfry is visible, it is very probable that St. Finnian erected one in the same period that the Church was erected. The legend of the â€˜Fugitive Bellâ€™ infers this. When he founded his first monastery at Aghowle, he erected therein a belfry. He placed in it a magnificent bell, the dulcet sounds of which could be heard for miles around as it summonded the community to devotions. St Finnian later moved this bell to his famous monastery in Clonard, Co. Meath. When one of the monks arose to ring it the next morning, it was gone. It was back in its original place in Aghowle and despite many attempts by St. Finnian to keep it in Clonard, it always managed to mysteriously appear back in Aghowle! Local legend has it that it can be heard ringing every seven years as sweetly as of old. It is said that it is buried somewhere near the Church ruins.

We use cookies on our website to give you the most relevant experience by remembering your preferences and repeat visits. By clicking “Accept”, you consent to the use of ALL the cookies.
Cookie settingsACCEPT
Manage consent

This website uses cookies to improve your experience while you navigate through the website. Out of these, the cookies that are categorized as necessary are stored on your browser as they are essential for the working of basic functionalities of the website. We also use third-party cookies that help us analyze and understand how you use this website. These cookies will be stored in your browser only with your consent. You also have the option to opt-out of these cookies. But opting out of some of these cookies may affect your browsing experience.
Necessary Always Enabled
Necessary cookies are absolutely essential for the website to function properly. These cookies ensure basic functionalities and security features of the website, anonymously.
Functional
Functional cookies help to perform certain functionalities like sharing the content of the website on social media platforms, collect feedbacks, and other third-party features.
Performance
Performance cookies are used to understand and analyze the key performance indexes of the website which helps in delivering a better user experience for the visitors.
Analytics
Analytical cookies are used to understand how visitors interact with the website. These cookies help provide information on metrics the number of visitors, bounce rate, traffic source, etc.
Advertisement
Advertisement cookies are used to provide visitors with relevant ads and marketing campaigns. These cookies track visitors across websites and collect information to provide customized ads.
Others
Other uncategorized cookies are those that are being analyzed and have not been classified into a category as yet.
SAVE & ACCEPT